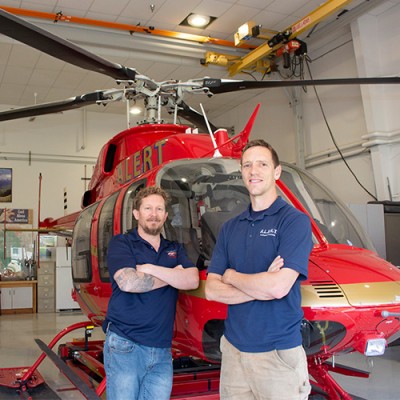 If you live in the Flathead Valley, chances are you’ve seen the A.L.E.R.T. helicopter flying overhead at some point or another. The bright red chopper is synonymous with Kalispell Regional Healthcare (KRH) and the patient care that it provides across this beautiful region. In such a spacious and adventurous area, the A.L.E.R.T. program at KRH is essential in providing safe, compassionate and expedient care for its patients from Cut Bank to Libby and Eureka, down to Ronan and beyond.

We often hear stories about some of the amazing rescues the A.L.E.R.T. helicopter goes on. But it’s easy to overlook the behind the scenes work that makes those rescues possible. During the 41st annual A.L.E.R.T. Banquet last April, the Triple Divide Award was presented to two of those behind the scenes workers who keep the program going. The award  was started by General Paul and Muffin Vallely through the Scott Vallely Soldiers Memorial Fund and is given to the most outstanding A.L.E.R.T. team members of the year, as voted on by the rest of the A.L.E.R.T. team. This year, aircraft mechanics Drew Bastick and Jared Benz were chosen as the recipients. “It’s a neat honor because it means that the people who are most connected to what we’re doing appreciate what we’re doing,” says Jared. Drew echoed that same feeling. “It’s very meaningful because those are the people who see our work.”

Drew Bastick serves as the director of maintenance for the program and has been with the team since 2016. Before his time at KRH he was an aircraft mechanic for both the San Diego County Sheriff’s Department and the United States Border Patrol. Prior to that, he served ten years in the U.S. Coast Guard, where he started his aircraft maintenance career working on rescue helicopters. During that time, he was stationed in the Caribbean, the Pacific Northwest and in New Orleans.

Jared Benz has worked with A.L.E.R.T. since 2015. Prior to his time at KRH, he was working on aircraft for Ryan Air, a freight company based out of Anchorage, Alaska. He jumped at the opportunity to work for emergency medical services (EMS) because of how much he appreciates the service they provide. His uncle was once seriously injured in a farming accident and if not for the timely response from an EMS helicopter, he probably would not have survived.

Drew and Jared provide maintenance for A.L.E.R.T. I (the current helicopter), the former helicopter (which serves as the backup), as well as A.L.E.R.T. II (a Pilatus PC-12 turboprop air ambulance). The helicopters require maintenance every 50 hours of flight time, much more frequent than the airplane. “EMS is a hard life for a helicopter,” says Jared. “The frequent takeoffs and landings create a lot of wear and tear.” But it’s the aircraft mechanics job to keep it going. The A.L.E.R.T. program’s outstanding safety record is a direct testament to the work that they do.

Neither one of them take lightly the severity of the work that they do. “We’re maintaining an aircraft that’s going out to save people in all kinds of weather,” says Drew. “They need the aircraft to work and we’re always going to do our best.” The aircraft maintenance is as integral a part to the A.L.E.R.T. program as any other and being awarded the Triple Divide Award shows just how much the team thinks of them.

The emergency air transport service always has been supported by the generosity of the local community. It started in 1975 as a cooperative effort among Kalispell General Hospital, the logging industry, National Park Service and U.S. Forest Service. Today it is a department of the not-for-profit Kalispell Regional Medical Center, with its hangar located just outside the Emergency Room door.

All money raised for the emergency air transport service throughout the entire year goes into an A.L.E.R.T. fund set up through the Kalispell Regional Healthcare Foundation.

Tax-deductible contributions may be mailed to:

Logan Health's Foundation and School-Based Services awarded $500 grants to 16 educators at Flathead Valley schools this October. The Healthy Classrooms grant provides funding to local schools to aid in the creation or improvement of student-centered …
Read more