A Collision Course with Cancer

A Collision Course with Cancer 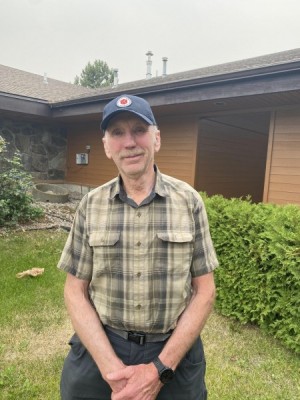 With adventure in every corner, the Flathead Valley is a hotbed for thrill seekers of all kinds. Every year, adventurists such as climbers, whitewater rafters, mountain bikers, skiers and snowboarders take to the mountains, lakes, rivers and trails to feel the adrenaline rush they crave. But with every adventure comes great risk. For 70-year-old Larry Bruce of Whitefish, an avid climber, biker and all around outdoorsman, the risk of adventure is what may have saved his life.

Back in September 2021, Larry and his wife Molly, were biking the trails of Spencer Mountain in Whitefish, a trail they have biked countless times during their 33 years in the Valley. But on that day, fate had a different plan for them. “I don’t remember why, but I ended up getting off course,” recalls Larry. The unfamiliar terrain resulted in a nasty wipeout for Larry. “I was tomahawked off my bike and ended up knocking myself out,” he says. “When I came to, I had signs of amnesia, but I seemed to be for the most part alright.”

After assessing himself, Larry determined that no medical attention was necessary. But Molly was not taking any chances. At the time, Larry had been on blood thinners due to issues with atrial flutter. Molly, a longtime employee at the Logan Health – Whitefish laboratory, determined that a head injury with those conditions was too dangerous and told him to get to the emergency room.

Larry paid a visit to the emergency room at Logan Health – Whitefish and was looked over by an emergency physician. The physician and her team did a thorough evaluation, and, while they determined that his head was fine, they found some concerning lesions on his pancreas and a nodule on his lung. Larry’s care team determined that the best move would be to have a biopsy done on both to make sure they weren’t anything more concerning.

While the lesions on the pancreas checked out fine with the gastroenterologists at Logan Health Digestive Center, the lung nodule was determined to be cancerous. The good news, however, was that the cancer was caught very early and could be addressed with minimally invasive surgery. Because of this, it was likely he would be able to recover fully. “It’s hard to believe that a mountain bike crash could have potentially saved my life,” continues Larry. “But if that thing would have metastasized, who knows what the outcome would have been.”

Larry was referred to Dr. Luis Alberton, thoracic surgeon at Logan Health Medical Center. Dr. Alberton, one of the region’s most skilled minimally invasive surgeons, assured Larry that robotic surgery would be the least invasive approach and would likely result in a shorter recovery time. Minimally invasive robotic surgery expedites a patient’s recovery time by avoiding the chest wall trauma that would’ve been necessary for a more traditional thoracotomy. An avid outdoorsman himself, Dr. Alberton understood the importance of a short recovery time for someone like Larry.

In January 2022, three months after the bike accident, Dr. Alberton performed a robotic lobectomy on Larry in which he removed about a quarter of his lung. Just two weeks after the procedure, Larry was able to resume some activities. And by the following summer, he was back biking Spencer Mountain. “I’m glad that I had somebody like Dr. Alberton taking care of me,” said Larry. “The minimally invasive thoracic surgery is a nice thing to have available in our community.”

Larry was able to get back to doing what he loves thanks largely in part to Logan Health’s system approach. With a flagship medical center in Kalispell complete with numerous specialty clinics and providers, Logan Health’s critical access hospital in Larry’s hometown of Whitefish was able to connect him with the proper specialists he needed to see in a timely manner.

Today, Larry is cancer free and continues to improve. Although his aerobic threshold has been compromised with the removal of part of his lung, he continues to push the boundaries that have been set for him.

While a fluke accident led to the discovery of Larry’s cancer, it’s important to have regular screenings — such as lung cancer screenings —at the appropriate ages. To find out more about the proper screenings you should be having at your age, talk with a primary care provider today!

Logan Health is a nonprofit, 603-bed health system based in Kalispell, Montana. While the main medical campus is located in Flathead County, Logan Health draws from a total service area covering 13 counties, nearly 40,000 square miles and a population of more than 600,000. The health system consists of six hospitals, more than 50 provider clinics and a host of other health care services, including the nation’s first rural air ambulance service (A.L.E.R.T.), which it has maintained for more than 40 years. More than 4,500 physicians, nurses, health care professionals and support staff work together to provide patients and their families with a positive, proactive, patient-centered experience. Founded in 1910, Logan Health has provided exceptional care for more than 100 years to the communities it serves. Throughout its history, the organization has continued to grow and evolve with the growth and changing needs of the communities it serves.

Logan Health's Foundation and School-Based Services awarded $500 grants to 16 educators at Flathead Valley schools this October. The Healthy Classrooms grant provides funding to local schools to aid in the creation or improvement of student-centered …
Read more

Paige Sadowski, Diabetes Care and Education Specialist at Logan Health, speaks with KGEZ AM Radio about living with diabetes and the diabetes education services offered at Logan Health.
Read more

Tyler Karlberg, CSCS, USAW, Certified Strength and Conditioning Specialist, speaks with KOFI AM Radio about the strength and conditioning services offered for adults and kids at the Medical Fitness Center.
Read more