How long will my ultrasound take?

For those who are new to Montana Children's Maternal-Fetal Medicine, arriving 15 minutes early helps us keep your appointment on track. This allows time for the perinatal nurse to take your vital signs and for you to fill out necessary forms. If you are bringing forms already completed, less advance time is necessary.

Do I need to have a full bladder?

Since sound waves do not travel well through bone, having a full bladder helps push a younger fetus up out of the bony pelvis for your pictures. Fluid in your bladder also provides a window for the sound to reach deeper structures and allows visualization of the birth canal.

We do not insist upon having a full bladder for your ultrasound. If you have had a normal fluid intake that day, during the course of the exam your bladder will fill. Once your pregnancy reaches approximately 30 weeks gestation, a full bladder is no longer helpful for ultrasound.

Will I hear my baby’s heartbeat?

Unless you are having a fetal echocardiogram or Doppler studies, it is not likely that you will hear the heartbeat. Your sonographer will document the heart rate in motion. You will see the motion of the heart beating and a graphical representation of heart motion over time. The baby’s heart rate is calculated from the graph.

Ultrasound energy is different from radiation and has proven beneficial for use in imaging the fetus. The perinatal sonographer will keep the exposure level as low as possible by minimizing scanning time and keeping output settings on the ultrasound machine within an acceptable range. Although use of ultrasound is discouraged without medical necessity, it is considered safe when used by properly trained individuals.

What is transvaginal or vaginal ultrasound?

Can ultrasound show Down syndrome or any other chromosome problems?

During the ultrasound, the sonographer will attempt to obtain images that provide in-depth information about fetal development. Often Down syndrome and other chromosome problems will be accompanied by abnormalities or findings that can alert the maternal-fetal medicine specialist.

Although an entirely normal ultrasound is reassuring and can lower the likelihood, it does not guarantee against the possibility of Down syndrome. An ultrasound is considered a screening test. In certain situations a more definitive test can be offered.

What can I expect to see when I have an ultrasound during the first trimester?

Due to advances in ultrasound technology it is now possible to see many of the early developing anatomical structures. As the fetus grows, more structures become visible. Although a first trimester scan does not replace the ultrasound anatomical survey generally done midway through the pregnancy, it can be very reassuring.

Ultrasound provides information that is used for some of the first trimester genetic screening tests, most commonly the nuchal translucency measurement. Every fetus has a narrow collection of fluid along the back of the neck, just under the skin, called the nuchal translucency. Measuring this fluid collection can be helpful in determining the risk of having a pregnancy affected by Down syndrome or another chromosome problem or syndrome. An abnormally thick nuchal translucency also may point to potential problems that can be checked for later in the pregnancy. Feel free to ask your provider about first trimester genetic screening options.

When can I find out if I am having a boy or girl? 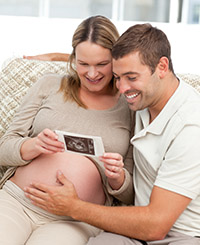 Most patients find out midway through the pregnancy when they have an ultrasound for fetal development – called the anatomy survey, or anatomical survey. Some patients find out sooner if they have specialized genetic testing involving blood work or amniotic fluid sampling that gives them the sex information along with their genetic results. There is still some uncertainty about the accuracy of ultrasound information before 15-16 weeks gestation.

How big is my baby?

Ultrasound can start to show an embryo at about five to six weeks from the first day of your last period, when it measures 4-5 millimeters in length. By the end of the first trimester (we use 14 weeks as the upper range), the fetus measures approximately 3 inches from its bottom to the top of its head – the crown to rump length. Measurement of the crown to rump beyond the first trimester becomes increasingly unreliable due to positional differences from baby to baby – some curled up, some stretched out.

In the second and third trimesters, ultrasound begins to measure the head (diameter and circumference), abdomen (circumference) and femur (length). This is why a specific length is not given; instead we use an estimate of the weight based on a formula using these three measurements. Ultrasound estimation of fetal weight is clearly that – an estimation. At the midpoint of your pregnancy, the fetus generally weighs 12-14 ounces. During the third trimester, a general guideline for fetal weight gain is roughly a half pound per week.

What is a biophysical profile?

Ultrasound can be used to assist your provider in monitoring fetal well-being. A biophysical profile can be used as a standalone test or in conjunction with other types of monitoring such as nonstress testing.

A biophysical profile is a timed test that can last up to 30 minutes. The sonographer observes the fetus and environment while assigning a score based on the following: In addition, the sonographer often assesses blood flow through the umbilical cord, which gives your provider information about how the placenta is functioning.

During the scanning process the sonographer often records images to document the position of the fetus, placenta and some of the fetal organs.

3D ultrasound is a newer technology made popular by the media’s use of the 3D baby face. 3D ultrasound actually has many other useful applications as well as some limitations. Montana Children's Maternal-Fetal Medicine uses 3D ultrasound whenever possible, depending on the position of your child and medical benefit derived.