Home • About Us • Our History
About Us

Whitefish’s first hospital still stands as a two-and-half story apartment building on the southwest corner of Spokane and Fourth Street. This hospital opened its doors in 1905 for those needing medical attention. Two nurses and a Great Northern Railway physician Dr. Hugh E. Houston staffed the hospital. In the early days, the railway employees provided much of the hospital’s clientele.

The second hospital site was at Park Avenue and Sixth Street. Dr. John B. Simons, who began his practice in Whitefish in 1937, opened a hospital bearing his name in 1947 with $80,000 from private sources and the Federal Reconstruction Finance Corp. Miss Edna Stokes was the first superintendent of this hospital. Dr. Simons sold his interest in the hospital to a civic board and the hospital was renamed to Whitefish Memorial Hospital in 1961.

The hospital expanded in 1975 with the addition of a $1.325 million, 50-bed Extended Care Center that was funded entirely by bond sales. In 1988 a construction and remodel project was completed that provided much more space. 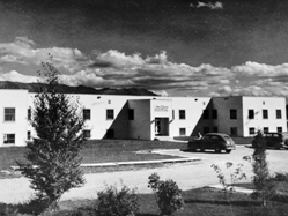 Plans for a new facility began in 1964. Extensive fundraising, spear headed by hospital board chairman Whitney Smith, produced $600,000 in valley funds, a $400,000 federal grant and $1 million worth of bonds. In June 1969, ground was broken for the third hospital on Highway 93. The hospital opened as North Valley Hospital on July 24, 1971 with Olga Torerson as administrator. Burl Hatfield was appointed to the administrator position on October 1971 when who was succeeded by Dale Jessup in January 1976.

In 2004, the North Valley Hospital Foundation began a capital campaign for the current hospital and new equipment under the direction of the Foundation director Carol Blake and CEO Craig Aasved. More than 800 full- and part-time residents donated a total of $6.3 million that offset the $27.9 million of the new building. The new modern hospital designed with the Planetree philosophy in mind, is located near the corners of Highways 93 and 40. It opened in March, 2007.

On September 1, 2021, North Valley Hospital transitioned to Logan Health – Whitefish. Logan Health – Whitefish serves more than 30,000 people that reside in Whitefish, Columbia Falls, Canyon communities and several small towns along the Burlington Northern line to Eureka. In recent years, residents and visitors throughout the Valley are choosing to experience the exceptional care that our hospital offers. Several past patients who have moved to other states and countries have even arranged to be a patient with us once again for births and planned surgical procedures and hospital stays.

We welcome you to your community hospital.