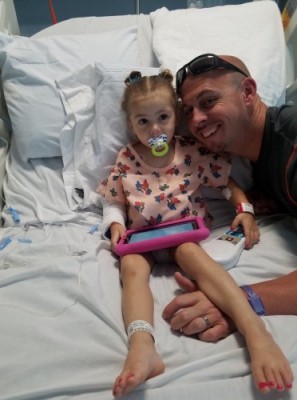 Today, Sofia Moss looks like any normal 4-year old girl. One might not even realize that Sofia is a warrior and cancer survivor. Her beautiful Shirley Temple style locks belie the fact that she lost nearly all of her previously straight hair during her chemotherapy treatments.

The truth is that none of the children in the Moss family likely remember a time when Sofia wasn’t sick. All four of the Moss children (who also include 3-year old twins Charlie & Savannah, and 1-year old Sadie Mae) exhibit extraordinary resilience and seem to have taken things in stride. When Sofia is having one of her nearly daily nausea spells (a side effect from chemo), even tiny Sadie is supportive, and she knows to find Mommy in the laundry room when Sofia needs her. The good news is that Sofia’s latest results showed no sign of cancer after 18 months of ongoing chemo treatments.

Zeremy and Jamie Moss and their family were fairly new to the Flathead valley and had just moved to their two-story home in Columbia Falls when they received the news about 2 ½ year old Sofia’s leukemia. Jamie was 8 ½ months pregnant with Sadie Mae.

Sofia had been running fevers nearly non-stop for a month. She was initially seen by their family physician, Dr. Chris Gill, for anemia and thrombocytopenia. Still, the fevers persisted, and Dr. Gill ordered a blood work up. They were not even home from the blood draw appointment when they received a call — Sofia had pre B-cell lymphoblastic leukemia, and they were being referred to a pediatric oncologist for further tests including a bone marrow needle aspiration to determine the extent that the cancer had invaded Sofia’s bones.

Acute lymphoblastic leukemia is the most common type of cancer in children, and it was affecting the B-cells in Sofia’s immune system. The disease starts in the bone marrow, which is the spongy center of the bones where new blood cells grow. The leukemia cells grow very fast and crowd out the bone marrow’s normal cells. B-cell acute lymphoblastic leukemia makes patients more prone to get infections because they don’t have the normal immunity of those missing B-cells. The good news is that most children can be cured of the disease.

Sofia spent the first several minutes of our time together being shy and busied herself helping her mom wipe down the fresh eggs they had just collected from their five laying hens. The other children were all happy to have a visitor and glad to show me their toys and their five dogs and talking parrot. Sofia eventually warmed up to me and invited me to her room to see the support banners made for her by family and to show me her Beads of Courage necklace. Children fighting cancer receive colorful beads from their health care team, which serve as meaningful symbols of courage and to celebrate the fact that they have completed another step in the road to their healing. Sofia’s own beaded necklace consists of four somewhat alarmingly long strands for someone so little.

Zeremy and Jamie Moss, who have been married approximately five years, seem to have weathered the storm with patience and grace. No question, both agreed that this has been no walk in the park. They are grateful that both have been able to be by Sofia’s side through nearly all of her procedures and treatments, but naturally this has taken a toll on finances due to missed work. They have four small children, and there has been anxiety and stress, and they have had to purposely isolate their family to reduce the amount of exposure to any outside illnesses while Sofia’s immune system was compromised by chemo.

The doctors and staff at the Northwest Oncology & Hematology – Pediatrics have been with them every step of the way. They are so grateful that they were able to obtain treatment for Sofia locally.

And Sofia? Sofia, the Brave & Strong, is doing what it takes to arrive at a point where she is declared cancer-free and embracing the normal pursuits of a four-year-old.

(A GoFundMe campaign has been set up for Sofia and her family. Information is available at https://www.gofundme.com/sofias-angels)

This article was published in the January/February issue of 406 Montana.