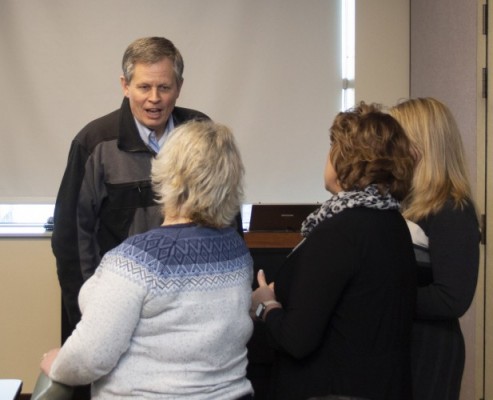 On February 20, Senator Steve Daines was in Kalispell to discuss the state’s ongoing drug abuse crisis with a panel of Kalispell Regional Healthcare (KRH) officials. The discussion highlighted the innovative solutions that KRH has implemented to support these families and the importance of telemedicine advancements to allow care to distant, rural communities in the fight against drug abuse.

A key issue resulting from Montana’s drug abuse crisis has been the increase in babies born with neonatal abstinence syndrome (NAS), a condition in which they are born experiencing withdrawal from exposure to narcotics while still in the womb. Prior to the panel discussion, Senator Daines took a tour of the KRH Neonatal Intensive Care Unit (NICU) to see firsthand the efforts being made to address this crisis.

The NICU has made tremendous strides since it was created eleven years ago and now offers some of the highest quality neonatal care in the region. In a way to address the anxiety parents deal with when separated from their hospitalized babies, NicView cameras were installed, allowing parents the ability to log in anytime, day or night, to see their baby in real time. New programs such as Reach out and Read, which incorporates reading into pediatric care, and the Incentivized Learning Program, which provides informational activities to parents in exchange of discounted baby supplies, have been key additions in the advancement of services offered at the NICU as well.

There have also been major cultural changes made. The KRH panel emphasized the hospital’s non-judgmental atmosphere as a step in the right direction. Panelist Lisa Smith, a social worker at KRH, noted that they’ve been trained to view addiction as a disease rather than a moral failure. Approaching patients with more compassion and less judgment creates a more inviting road to recovery for patients in need of help. Dr. Kristin Veneman, a neonatologist at the NICU, has also noted skin-to-skin care as a vital importance to newborns, especially premature newborns. Babies who have been held skin-to-skin regulated their vital signs better, had better growth, improved developmental outcomes, and had earlier discharges.

The panelists also referenced the importance of screening. Thanks to a grant from the Montana Healthcare Foundation, an integrated behavioral health program was started with the goal of helping expectant mothers to be screened for drug use, but in a way that is not punitive. The program helps them connect with resources they need pre-term.

Over the past five years, KRH has received three Federal Distance Learning and Telemedicine grants from the United States Department of Agriculture to fund telemedicine solutions to assist rural communities across Montana. The most recent grant awarded in November of 2018 has the following goals:

These first of these grants funded new equipment to start KRH’s Telestroke program, placing InTouch Health RP Lite “robots” also known as telestroke robots in six rural Critical Access Hospitals (CAH) across the state of Montana. KRH since then has partnered with the state of Montana to have KRH Neurologists support an additional six robots covering a span of CAH’s as close as Whitefish and as far away as Glasgow. These machines allow pediatric specialists and neonatologists at KRH to collaborate with medical professionals in towns where those specialists weren’t previously accessible. Both a RP Lite robot and a neonatal simulation doll, used to prepare medical professionals in assessing and treating babies with NAS, were on display for the Senator’s visit. Panelist Nichole Perisho, RN, the telehealth clinical coordinator at KRH, emphasized the importance of these tools in preparing rural hospitals for treating patients in the wake of the drug crisis. Perisho also talked with Senator Daines about room for improvements regarding the updating of reimbursement policies and proper broadband service.

Senator Daines commended those on the front lines at KRH for their dedication to combating this epidemic and encouraged the continued collaboration between healthcare providers and policy makers at working towards solutions.

Chelsea Dunshee, family nurse practitioner at Logan Health Primary Care, talks with KGEZ AM radio about the role of walk in care and the type of care you can expect to receive at one of our clinics. Weekend walk-in care will now be exclusively …
Read more

Logan Health is launching the Nurse Call Line, a free service for our community using the foundation developed by the organization in response to the novel coronavirus.During the COVID-19 global pandemic the organization stood up a 24/7 call center, …
Read more