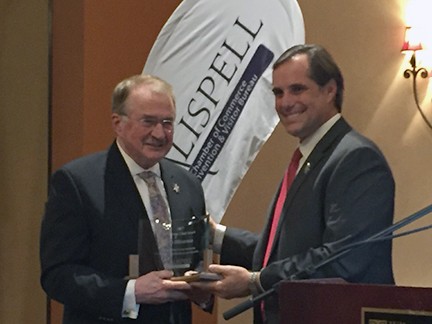 Jim Oliverson, retired vice president of community relations at Kalispell Regional Healthcare, was recognized with the 2017 Great Chief Award by the Kalispell Chamber of Commerce during its 113th annual banquet held Thursday, November 9.

The award, the oldest and most prestigious award the Kalispell Chamber bestows, was given to Oliverson in recognition of his sense of service and his many years of dedication in support of the Flathead Valley community.

Oliversion spent his career heavily involved in several Flathead Valley nonprofits and has been an active member of the chambers of commerce throughout northwest Montana, including Kalispell, Polson, Whitefish and Columbia Falls.

Logan Health has been recognized as a winner of the 2022 Community of the Year Population Health Pioneer Awards, presented by Caravan Health, part of Signify Health. The award is given to Accountable Care Organizations (ACOs) and partners each year …
Read more

Logan Health Medical Center and Logan Health—Whitefish have been recognized as top hospitals in the nation for the third consecutive year for their focus on rural health by The Chartis Group, a leading health care advisory and analytics firm. The …
Read more