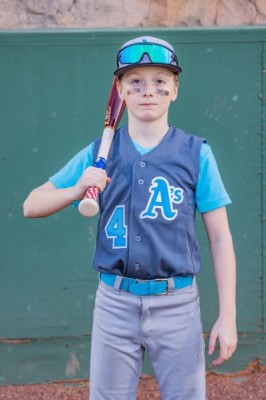 “Did you know there are 1.6 million people with diabetes in the US? You probably didn’t, well I am one of them. When I got diabetes, I saw a bunch of needles getting stuck in my veins. The moment impacted me because I thought I wouldn’t be able to do other things normal people can do. I have to sit down sometimes while everyone else is having fun playing baseball. So that decreases my skills because when I practice and have low blood sugar, I have to sit out so I can’t practice as much as other people can. I also get sluggish when my blood sugar is high when I do not take enough insulin. Insulin is what gets the sugar to my organs so the organs can function.

So, before my disaster of getting diabetes, I was getting very sick and very ill and pale. It started getting worse and worse. After every meal I was getting so sick because I was eating carbs which would make my blood sugar a lot higher without a dose and I wasn’t dosing for anything at that time cause me and my family didn’t know I had diabetes yet. So, the next night it got really bad and I started feeling like I had to throw up. So, we went to the ER to see what it was. At that time, we had thought it was my appendix and we had to get it removed but no, it was diabetes so I was in the ER and they were asking me questions and stuff but one question they asked really told them everything this is what they said. “Where does your belly hurt” and I said back, “like in the middle of my chest kinda where my heart is.” Once I said that they knew it was not my appendix. So, they ran some tests on me and when you have diabetes for a while you will have DKA. I don’t expect you to know what that means but it makes you pee a lot. There’re more details about that but that’s the main thing you should know about it. So anyways I went to go pee for some tests they had to do and they ran some tests on it and they realized my blood sugar was about 800. Then they escorted me to a hospital where I had to stay there for a whole day.

The actual moment when I had to get used to dealing with diabetes was very hard because I thought I wouldn’t be able to play baseball and do what I wanted to do. I kept getting down on myself because I thought about all of those things. It was also really hard getting used to diabetes. It took three months to get used to the process. Now I have to see how much insulin I need. That is what diabetes is and it’s not as bad anymore. I can still play baseball and I do all the sports I want to play, I just need insulin.”

Logan Health – Conrad recently received continued certification as a Trauma Receiving Facility from the Montana Department of Health and Human Services. Since March 2009, the hospital has met state and federal requirements proving its preparedness …
Read more