A second chance at life

A second chance at life

The holidays are always a special time to spend with friends and family. For Duane Deboer, a patient at Kalispell Regional Medical Center, celebrating these traditions and holidays seemed uncertain this year. It was only just a couple months back when Deboer thought his life was going to end.

On the Friday before Memorial Day, Deboer noticed something strange about his skin—it appeared heavy and swollen. He ignored it until his fiancé, Laurie Backen, started noticing other symptoms. “I remember having to wake him up every 10 minutes because he would stop breathing in the night,” she recalls. “He’s quite stubborn and he wouldn’t go see a doctor for it.”

Backen eventually convinced Deboer to see a doctor and find out what was going on. He went to a neighborhood urgent care clinic for bloodwork and an x-ray—which revealed a large mass in his lungs. Deboer was immediately referred to Northwest Oncology and Hematology for an emergency biopsy.

“I remember going in to get the biopsy done, and then after that, everything went black,” says Deboer. “I woke up two weeks later in the ICU. I don’t remember much from that day, but they told me I went into cardiac arrest during the biopsy. It was tough waking up and not knowing what was going on.”

Dr. Jeffrey Eshleman, radiation oncologist at Northwest Montana Radiation Oncology was there to help Deboer understand what was happening to him. “Duane came to us with life-threatening cancer that was preventing his heart from pumping blood to the rest of his body as well as obstructing its return to the heart,” explains Dr. Eshleman. “There was a moment during his visit that we didn’t think Duane would make it.” 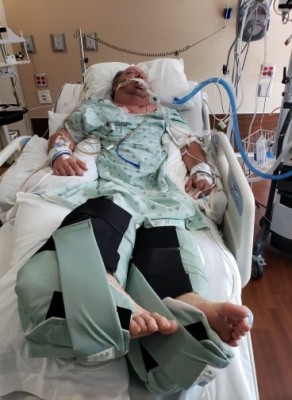 Deboer was in the ICU three weeks. “I could barely talk because I had the trachea in my neck to help me breathe, I didn’t quite know what was going on,” explains Deboer. “People say that even when someone is unconscious, they can hear what is going on around them. I can speak truth to that. Even when I was unconscious, I could hear my fiancé right by my side, comforting me, telling me stories and telling me that I could get through this.”

After an intense month of in-patient treatment, he was able to return home to continue his healing. “Duane responded really well to the treatment while he was in our care, and was able to be discharged in amazing condition,” says Dr. Eshleman. “The urgent coordination of care between hospital team, interventional radiology oncology and medical oncology allowed for urgent care that saved his life.”

He finished his chemo and radiation treatment at the end of the summer and is currently without evidence of any disease. Deboer says he’s most grateful to be able to have his care right here at Kalispell. “It was such a blessing to be able to get high-quality care here at home. I can’t say enough about the excellent care I’ve received from everyone—doctors, nurses, front office staff—the list goes on,” he says.

Deboer was able to continue his job as the photographer for The Event at Rebecca Farms event shortly after he was discharged from the hospital. With such a grateful heart, Deboer donated some of his photographs to Dr. Eshleman and the infusion clinic at Kalispell Regional Medical Center. “I’m just so grateful to be here today, and thankful for this entire organization, especially Dr. Eshleman, Dr. Wagner and the rest of the oncology team” says Deboer. “In the future, I would love to do free photoshoots for families with children who are battling cancer. I want to give back, and this feels like something I am being called to do.”

Sara Dye, RN, and Jeana James, RN, Workforce Development Instructors at Logan Health, speak with KGEZ AM Radio about the various career training programs offered at Logan Health and how candidates can advance beyond these
Read more

Registration is now open for Logan Health’s second annual Cedar Creek Marathon set for Saturday, September 23, 2023. Participants can register online for the Full Marathon, Half Marathon, 10k, and 5k events now through the day of the event.“Sign up …
Read more