A Miracle on the Mountain

A Miracle on the Mountain

KRH Medical Professionals Save the Life of Skier on Big Mountain 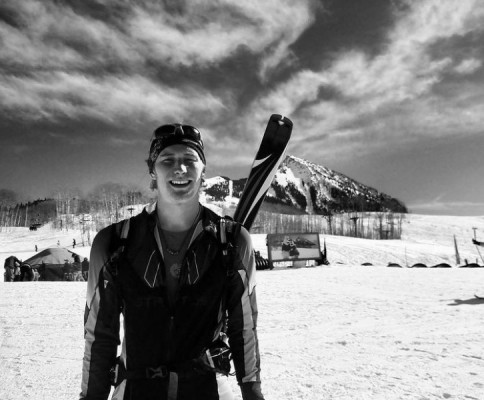 On the evening of January 6, 31-year old Erik Sanders, of Colorado, was driving up to Big Mountain in Whitefish to participate in a skimo race, the first race of the mountain’s Skimo Wednesday Night Race League season. Skimo, which is short for ski mountaineering, is a strenuous sport that consists of racing up and down the mountain along a course. Erik and his girlfriend Liz were in town to scout out the area, as they planned to move to the Flathead Valley in February. While skiing up the mountain a few days before, Erik had heard about the race league and figured that this was the perfect opportunity for him to make some like-minded friends in his soon-to-be home. Erik, an avid mountain endurance athlete, frequently participates in adventure races and backcountry mountain objectives from the local mountain ranges to areas all over the world, so this scene was right up his alley. As he and Liz made their way up the mountain, they nearly took a wrong turn. Little did Erik know that would soon be his last memory of the week.

As the race began, Erik made his way towards the front of the pack of roughly sixty racers. In skimo racing, participants push themselves extra hard in the beginning of the race to establish positioning. For about 10 minutes, he pushed himself harder and harder until disaster struck. Along a narrow trail through the trees, Erik went into cardiac arrest and collapsed. Racers behind him came upon him just seconds after he fell to the ground. One of the first ones on the scene was Rachel Desimone, a nurse practitioner at Montana Children’s Specialists at Kalispell Regional Medical Center (KRMC). “My friend in front of me screamed out and alerted me that there was someone down,” says Desimone. “It was dark, but when I got up there, he was lying face up in a bit of a wonky position.” Sensing the severity of the situation, she told her friend to ski down to alert Ski Patrol.

As Desimone looked for any signs of life, Tyler Hoppes, MD, emergency physician at the KRMC Emergency Department, came upon the scene. “It looked as though it was a cardiac event,” says Dr. Hoppes. “So I quickly took off my skis and felt for a pulse. He didn’t have one and so I knew we were going to need to begin CPR.”

Just as Desimone and Dr. Hoppes were assessing the situation, a third KRMC provider, Pete Heyboer, MD, internal medicine physician at Family Health Care, stopped to help as well. It had only been seconds since Erik collapsed and there were already three trained medical professionals tending to him.

“The first thing we did was establish roles,” says Dr. Heyboer. “It’s really important in codes to get organized, because otherwise it can be chaotic. So we quickly decided Tyler would be in charge and would hold for a pulse while Rachel and I would switch off between giving breaths and giving chest compressions to prevent fatigue.” 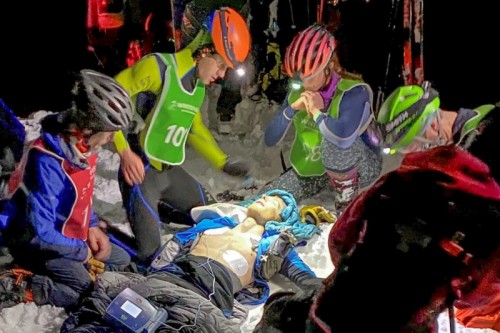 scene of the accident, bringing with them an automated external defibrillator (AED) and a toboggan. The team quickly hooked the AED up to Erik’s chest, where it determined his heart had a shockable rhythm. They administered the shock, but it was unsuccessful in restarting his heart. No further shock was advised beyond that point.

The team loaded Erik up into Ski Patrol’s toboggan while continuing chest compressions and began the challenging trek down the mountain. “We weren’t in an area where we could immediately ski down to the bottom,” explains Desimone. “We had to go up and down the hills of the course on a toboggan with three people on it (Erik and two people to continue working on him), which was upwards of 600 pounds. We would fly down the hills, but it would take a lot of help to get the sled up each hill.”

Fortunately, they had the help. In addition to Ski Patrol, many of the other racers stuck around to help with the evacuation. The race had been called off and now they were all doing what they had to do to save their fellow racer. For the three providers, it was a treacherous task to continue CPR on top of a toboggan while flying down the mountain. “At one point we came across an area full of moguls,” says Dr. Heyboer. “I was on top of Erik doing chest compressions and as we hit one of the moguls, I was bucked off of the sled. Fortunately Tyler was right there and leapt right back on top of him to continue the compressions.”

It took the group about 25 minutes from when Ski Patrol first arrived to get Erik back down to a waiting ambulance. He still didn’t have a pulse and so EMTs quickly got him hooked up to a LUCAS device, which administers chest compressions automatically. He was then given an epinephrine injection and finally, after roughly 40 minutes, they were able to feel a pulse.

The ambulance crew - along with Dr. Hoppes, who accompanied them - quickly took off with Erik to get him to the KRMC Emergency Room. As Dr. Heyboer and Desimone recollected after their dramatic encounter, they figured that Erik’s chances were not very good. “The chances of being discharged from the hospital after cardiac arrest outside of a hospital are already slim,” says Desimone. “The chances of somebody being discharged after that without severe disabilities – well that just doesn’t happen.”

“We knew that Erik was young and that he was healthy, so he had those things going for him,” continues Dr. Heyboer. “But even with those advantages, we still weren’t particularly optimistic in the outcome. We knew we had done as good a job as we could, but his chances were still not very good.”

“Having seen this situation many times in my career, I knew the odds of survival were not very good,” added Dr. Hoppes. “Halfway to KRMC, Erik started raising his head up and moaning. That was a little bit encouraging. I thought he may survive, but I figured he would be pretty debilitated.” At KRMC, Dr. Hoppes passed Erik off to his emergency room colleagues, where they took the situation over. Erik was placed into a medically induced coma and cared for in the KRMC Intensive Care Unit.

On Friday January 8th, just two days after Erik’s accident, he awoke to the sight of a ventilator being pulled out of his throat.  He had no clue where he was or what had happened to him. The last thing he remembered was almost taking the wrong turn on his way up to the mountain. “I figured something must’ve gone wrong in the race, but I couldn’t remember any of it,” he says. “It wasn’t until Liz filled me in on what had happened that I knew.” She had also let Erik know that the three providers who saved his life had stopped by during their shifts at the hospital a few times to check in on him and see how he was doing.

“I couldn’t really describe how thankful I was,” Erik continued. “It just so happened that I was able to recover and get discharged from the hospital exactly a week after the accident, on January 13, the day of the next skimo race on the mountain. There was nothing I wanted more than to go thank all of the people who had a part in saving my life.” And that’s exactly what he did. Just one week after a near fatal event, Erik, along with Liz and his parents who flew in from Minnesota, went back up the mountain to thank all the people who refused to quit on him.

“It was a pretty emotional get-together for me,” Erik says. “I couldn’t really describe how thankful I was to everyone who helped me, whether 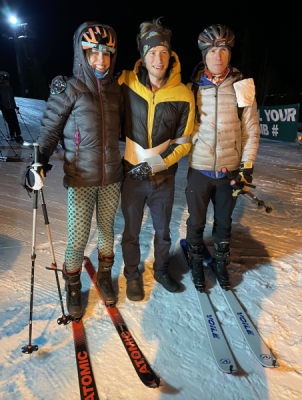 directly or indirectly. They poured all they had into getting me back to the condition I’m in now.”

But for those who were up on the mountain. It was an equally emotional reunion. That lifeless man they met one week earlier lying in the snow was up and walking around talking with them, having made a miraculous recovery nobody saw coming. “It was truly a remarkable sight to see that night,” recalls Dr. Hoppes. “We got to talk. I teased him saying that it’s either a good thing that he’s fast or that we’re slow.”

Erik continues to improve with each day outside of the hospital. He had an implantable cardioverter-defibrillator placed in his chest to detect any sort of future irregularities. He is now recovering at his parents’ home in Minnesota and feels as though he has a second chance at life. It’ll be a little while before he can get back to doing the outdoor activities he loves, but there’s no doubt he will.

Throughout Erik’s life, a quote from the movie Rocky has been a source of inspiration: “In life, It ain’t about how hard you hit, it’s about how hard you can get hit and keep moving forward.” Today, that quote has a significant meaning in his recovery. “What happened is in the past, and moving forward I am going to learn from this experience and make the best of it," he continues. "That's all anyone can do in life. And if the doctors determine that extremely high intensity races aren’t good for me, that wouldn’t be the end of the world. Ultimately, I just want to get out into the mountains and have fun.”

As for Erik’s plans to move to the Flathead Valley, his near death experience has not changed his mind. He and Liz plan to move out to the area in March, just one month later than expected. “Some people might be deterred by an event like this, but for me it seems like the best community I could possibly be around - one that saved my life. I really couldn’t imagine going anywhere else.”