Medical services were available in Chester as early as 1909.  Dr. W. H. Melvin was the first doctor to practice in Chester with offices at the Prairie Inn.  Dr. A. A. 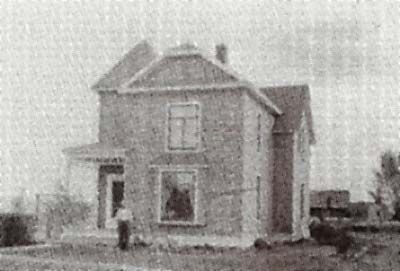 Pastene opened an office in 1912 and Dr. L. L. Mayland in 1913.  In the year 1912, Chester supported three doctors.
In September 1935, Miss Anna Carroll opened the Carroll Hospital in the old Methodist parsonage.  In 1936 it was moved to the Marshall house on First Street East.  The Carroll Hospital closed in 1937.

Mary Lynn Buck opened the first fully equipped hospital in a two-story building in 1938.  During the first year, 125 patients were cared for.  The hospital had nine beds and was equipped for maternity care.  This hospital operated until March 1946.

The first Liberty County Hospital opened in 1948 in the old bank building.  On January 16, 1952 a new ten-bed hospital was opened, closing soon after and 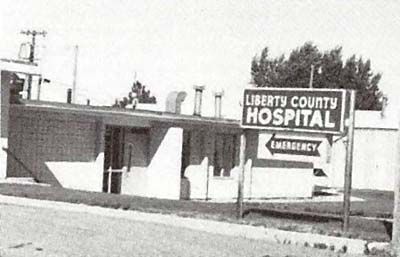 reopening in 1954.   At the root of Chester’s modern health care facility history is Dr. Richard Buker, Jr., a private physician and surgeon who maintained a private medical/surgical practice in Chester for over 48 years. Dr. Buker is renowned for his skill and dedication as Chester’s “country doctor” for the past five decades.  Retired now, Dr. Buker is still present in the community. The first wing of the nursing home was completed in June of 1958.  The second wing was completed in 1968, adding twenty-two beds making it a 40-bed facility.

Liberty County Hospital operated until 1974 when the new and present facility came into being. An eleven-bed facility was completed in September 1974 at a cost of nearly half a million dollars.  The hospital was made possible by gifts and donations from community members who realized the importance of good and continued health care in the rural community.

The old Hospital was made into a Retirement home with an Assisted Living wing and Administrative offices.

In 2000, the clinic merged with the hospital facility. Liberty Medical Center-Clinic is the rural health clinic of Liberty Medical Center. This was done to combat declining reimbursement from Medicare/Medicaid programs and to promote clinician retention by strengthening the overall employment package for medical providers.

The reimbursement that a CAH receives is intended to improve their financial performance and thereby reduce hospital closures.

In August 2007, LMC became designated as a MontanaTrauma Receiving Facility by the State of Montana.  We continue to be the only Trauma Center along the Hi-Line between Malta and Conrad.  In April 2011, LMC implemented EHR (Electronic Healthcare Records) in our clinic.

Liberty Medical Center joined the Logan Health system in July, 2022, recognizing that collaboration would enhance the local healthcare and help sustain the future of the rural hospital.

Current day, Chester’s population is 900, but our medical facility, Logan Health Chester, provides medical care to a service area of 3,000, and is a critical access hospital facility that is Medicare and Medicaid approved and licensed for 25 beds by the Montana State Department of Public Health & Human Services.  We provide services 7 days a week, 24 hours a day.  Logan Health Chester has been committed to providing quality healthcare services for over 50 years to residents and visitors in Liberty County and along the Hi-line.