History of the Program

In the spring of 1975, a young logger sustained a critical head injury in a remote area and was transported by the only means available, a helicopter patterned after the kind used during the Korean War. This style of transport did not allow for treatment during flight and unfortunately the young man died. This tragedy led to the development of a coordinated, hospital-based helicopter rescue system culminating in what is now known as the Advanced Life-support and Emergency Rescue Team.

The A.L.E.R.T. program started as the second hospital-based advanced life support helicopter system in the United States and the first of its kind in rural America. A.L.E.R.T. faced financial difficulties in 1978. The local community rose to this potential crisis with the formation of the A.L.E.R.T. Board, comprised of community members from businesses, primary rescue, logging, and Park and Forest Service. Some Board members and their families provided the initial funding to purchase the first helicopter.

Anticipating the need for a more widespread effort for community financial support, the Board established the annual A.L.E.R.T. banquet. Proceeds from this event, coupled with generous financial support from community donors, have sustained the program for more than 40 years. 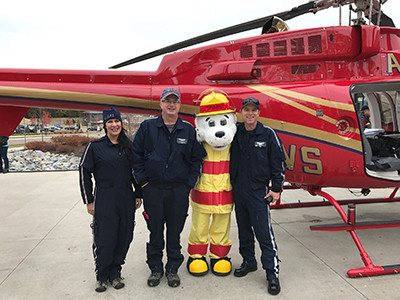